The North Shore Junior Orchestra is a children’s orchestra made up of students aged 9 – 13 years. We rehearse on a Wednesday afternoon 5.00pm – 6.30pm at St Peters Church, 11 Killarney Street, Takapuna.

2017 was an extremely successful year for the orchestra performing at the Town Hall Concert Chamber for the mid year concert, as well as going on tour to Hamilton. They also played to over 2500 students from various schools around the North Shore and Hamilton regions, and have performed at the Takapuna Primary School fair.

2016 found the Junior Orchestra on tour to Tauranga and Kaitkati, performing on stage at the Bruce Mason Centre in June, performing to over 1000 school students on their annual schools tour in November, and entertaining many members of the community at various concerts throughout the year.

The North Shore Junior Orchestra is an orchestra made up of young musicians (Ages 9 – 13 or year 5 – 9) from around Auckland’s North Shore. Every year we prepare 5 concerts for parents and the community in hope of improving the musical talent on the North Shore. Players of all orchestral instruments are invited to audition for a place in the orchestra at the beginning of the year, with a few auditions throughout the year for late starters.

Since 2008 the orchestra has steadily grown to a 45-50 piece orchestra with most instruments represented. They began touring to small town centres in 2011, travelling to Paihia and Whitianga and in 2013 began a local Auckland busking day playing at Wynyard Quarter and Mission Bay.

The highlight of each year is the Mid Year combined concert, where the Junior Orchestra joins the other 6 groups in North Shore Music to showcase their talents on the big stage. 2014 included another combined concert at the Bruce Mason along with a combined tour with the Children’s Choir to Hamilton or Tauranga. And 2015 encompassed the Bruce Mason concert, a tour to Taupo and Cambridge, and finished with a local schools tour around 4 primary school on the North Shore. 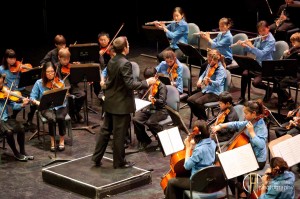